Why AngularJS is a Well-Liked Front-end Development Tool?

AngularJS popularity as the JavaScript framework is increasing at a steady rate. While there are many other great Javascript frameworks available out there, but looking at Google Trends (as shown in the screen shot below), AngularJS appears to be the most dominant framework compared to EmberJS and BackboneJS in terms of ‘interest over time’. 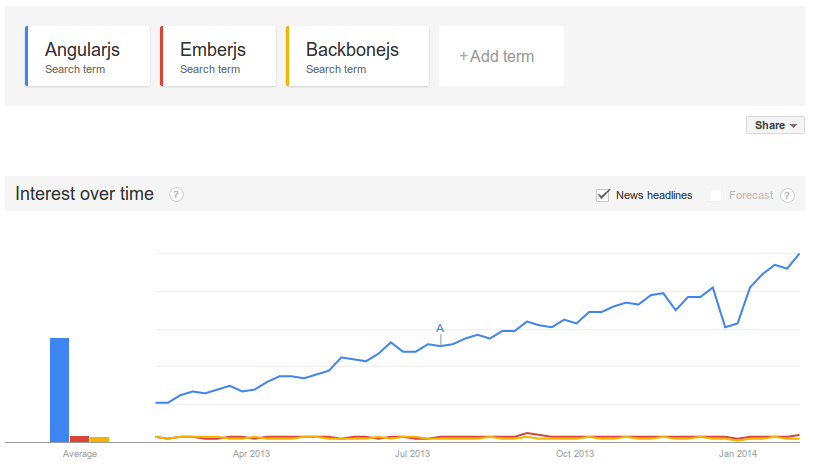 What’s more? AngularJS maintains its dominance over other platforms, as it provides the highest level of community support (than Ember and Backbone). 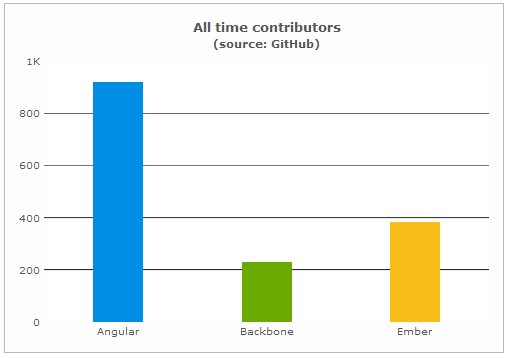 The agenda of this post isn’t about bashing Ember, Backbone or any other popular JavaScript framework that you’re using or planning to work with. Rather, we just want to bring your notice to the fact that AngularJS popularity is growing – something that any serious developer can’t afford to neglect. Besides, we’ll make you know about some of the major reasons that make AngularJS framework one of the most well-liked frameworks among the available options.

Note: We’ll be referring AngularJS as Angular throughout this post.

The Power of Two-Way Data Binding

One of the biggest reasons behind Angular popularity can be attributed to its data binding feature. Thanks to this feature, you can save a lot of your valuable time spend in writing “boilerplate” code. The code base of a web app usually dedicates up to 80 percent of its time in performing tasks, such as: traversing, manipulating, and listening to DOM events. But, data-binding helps get rid of that code, thereby helping you concentrate only on the important aspects of your application.

In a classic template system, data binding takes place in one direction and combines template and model into a view. And then, whatever changes are made within the model components and view sections doesn’t get reflected in the view on its own. What’s worse, is that even the changes made to the view by the user aren’t reflected in the model. Thus, developers are compelled to manipulate the DOM elements and attributes manually, so as to make the model synchronize with the view frequently and vice versa.

But, the Angular templating system makes use of the two-way data-binding, which helps in handling the synchronization between the model and view automatically.

AngularJS come loaded with a built-in injector subsystem that makes the process of application development easier for developers, as the subsystem enables component creation, dealing with dependencies, and even pass them to some other components as and when required.

Dependency injection (DI) is omnipresent in Angular framework, and enables the framework to carry various conventional services. This helps in reducing the burden on the server, thereby making the web applications faster. In case, you need to access some of the core Angular services, you just need to add the service you want as a parameter; Angular will figure out that you’re in need of some service and accordingly provide you with an instance.

Dynamic View with the Help of Templates

When we talk about templates in Angular, it is not much different from any standard template that is written in plain-old HTML format (not to mention that the template includes components and elements of the Angular framework). The best part is that the template is merged with information in Angular, in order to provide users with a dynamic view in the browser.

Let us now look at the attributes and elements of Angular that you can use in the template:

The template contains HTML and CSS, as well as, Angular directives all included in one single HTML file. On the other hand, in a complex app, you get the ability to present multiple views in one of the main page via “partials” – that are a template segment contained in many different HTML files.

Though there are many other remarkable useful features of Angular that makes it popular among developers, but we’ve tried covering 3 of the most important features that will give you an idea as to why you should consider adopting Angular for your web application project.

Experienced full stack freelance web developer with a track record of producing excellent results for 11+ years. Excellent communication and collaboration skills, managing with a team of 20+ people. I’m motivated to make a positive impact on your revenue through the customer web portal development project.